At this November's National Collegiate Choral Organization conference (start reading my many blogs from NCCO here) I was fortunate to meet Kira Zeeman Rugen, a bright young singer/conductor and grad student from Greg Gentry's Arizona State University choir who performed at NCCO. Kira asked to interview me as part of her dissertation on recent trends in American choral music and after the interview she told me that she would be singing with Michael McGlynn's Anúna on tour in Japan (I had met Michael earlier this year at ACDA Chicago and we really hit it off). I invited Kira to guest blog about her experiences- you are in for a treat of a read. It will be in two parts starting today.

(BTW, I am looking for more cool guest bloggers who woudl liek to share interesting ideas and expereinces in the choral world- please step forward if you are interested).


Here is a pic of Kira and her bio, and then I will turn the rest of the blog over to her: 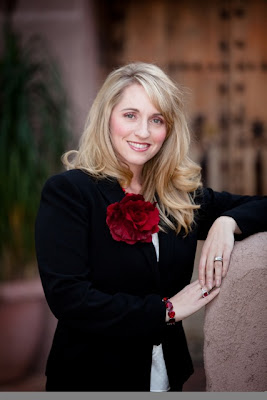 Kira Zeeman Rugen, singer and conductor, is pursuing a DMA in choral conducting with a cognate in vocal performance at Arizona State University where she conducts the early music ensemble, Solis Camerata (Choir of the Sun). Kira is also in her eighth season as a singer in the Phoenix Chorale under Charles Bruffy, and is a member of Anuna, Irelands National Choir. She has performed under the direction of Ton Koopman in Carnegie Hall’s Young Artist Concert Series, at the Incheon International Choral Festival in Korea and has sung extensively throughout Italy, Ireland and the U.S. She earned a Bachelor of Arts degree in vocal performance and choral conducting from Weber State University, and a Master of Music in choral education with an emphasis in vocal performance from Arizona State University. Kira has taught children and youth choirs, high school choirs, orchestra and musical theater in the greater Phoenix area.


Singing with Anúna – Part I

My name is Kira Zeeman Rugen and I am a DMA candidate in the Choral Conducting program at Arizona State University. I’d like to thank Paul Carey for inviting me to be a guest writer on his blog and I’m excited to share my story.

As a part of my degree, I am pursuing research on the performance practice techniques of contemporary professional choirs. I have had the fortune to interview many interesting conductors and composers for my research, and through this process I met Michael McGlynn. I have always been fascinated with the music of Anúna, particularly the visual beauty and the aural esthetic they have become famous for and wanted to include it in my research. I attended Anúna‘s summer workshop in Dublin last July, and had the honor of singing with Anúna as a part of that event. It was a memorable and fun experience and the information I gleaned for my research was of great value to me. Much to my surprise and excitement, in August, Michael McGlynn invited me to become a touring member of his choir, Anúna. It was an offer of a lifetime that I could not refuse.

My first tour with Anúna, Ireland’s National Choir, was on a two-week concert tour to Japan just last month (December 2011). This adventure certainly gave me first hand eye-opening information for my research. When the schedule of events for the tour arrived, I took one look at the timetable and immediately thought, “That looks like the ugly underbelly of the life of a rock star.” I didn’t know then just how accurate a description that was. Working with Anúna is not like working with a traditional classical choir. As an eight-year member of the Phoenix Chorale and having traveled with them extensively during that time, I am accustomed to rigorous schedules, flights, buses, great friends, exciting cities, beautiful music and rewarding concerts. Touring with Anúna had all of those same elements but with a whole new set of dynamics. Many elements were new to me as a professional singer, and particularly unique to Anúna.

We perform as twelve singers. Every voice is integral, and balancing the sections was always of primary importance. We perform without a conductor, giving us the freedom to perform as a chamber ensemble, communicating directly with an audience. Typically this technique is practiced by ensembles that regularly rehearse and perform together. Often, an Anúna touring group doesn’t get the chance to rehearse together until on location… so we learn fast!
We usually perform with microphones in larger halls. The amplification is meant to ‘lift’ the sound for a natural mix, rather than amplify the sound. The effect is one of a quiet wash of voices that the audience strains hear, as opposed to the wall of blasting speakers found in rock music.
We perform everything memorized, and had to learn by heart all potential lines (S1, S2, and A for girls. T1, T2, B for the guys). 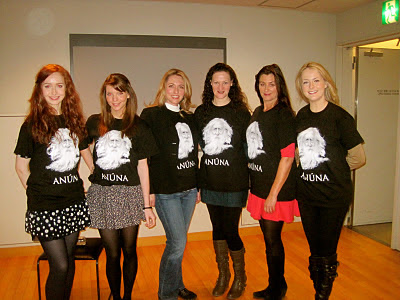 The women of Anúna
I had to alter my tone to fit within the context of their sound, which does stems from a classical tradition, but has a different production than I am accustomed to. There is a mixture of trained classical singers and gifted amateurs, which provides for a unique and beautiful color. I think the best way to describe the tone is to compare it to the traditional solo Irish folk song tradition, and then applied to a choral medium. Let’s just say that operatic vowels do not work here!

Language pronunciation is an issue as the singers are from several different countries. Anúna is based in Dublin, with about thirty-six singers currently on the roster. They come from Ireland, Northern Ireland, Scotland, England and the U.S. The Japanese tour included twelve of those singers: three from Northern Ireland, seven from the Dublin area and two from the United States. There are times that the natural Irish accent is compelling in the music. Other times, such as when singing in Latin, we have to work to find some middle ground.

We never know what music, what order, what part or which solo will be sung by whom until we are well into the dress rehearsal of a concert that opens in two hours. Also, Michael prefers to operate without a printed program. There are pros and cons to this method:

Con: It is difficult to know the show down ‘cold’ before it begins and the dress rehearsals feel frantic.

Pros: The show can be flexible, improvisational and fresh for every audience. If someone is sick or is unable to perform, anyone in the ensemble can fill in as necessary. This format prevents the show from growing stale or old and allows for artistic license in any given setting. There is no program to dictate what is coming next, so the audience may experience surprise and wonder by not knowing what is expected.

Anúna is known for their use of space and sound in creative and unconventional ways. We use the entire space of the hall for choreographed and movement numbers. There is a presentation, a gait and appearance that is a part of being an Anúna singer, in particular for the women- slow, graceful, beautiful and natural. It’s not as easy as it sounds!

A unique and defining characteristic of Anúna, is how much we rely heavily upon one another in concert. Even though Michael McGlynn is the leader, there is an egalitarian aspect to the duties and interaction. All singers correct and help each other, create the staging together, and everyone is highlighted as a soloist or instrumentalist in the concerts. Although the choir takes the rehearsals seriously, there is silliness in the work. When the stress gets high, the clowning around keeps the tone light. The Irish work as hard as they play, in all aspects of their life! Their jokes, sarcastic banter and clever tongues add to the camaraderie and fun that defines the group. At first they made my transition into the group comfortable and fun. Then the ‘all-in-good-fun’ teasing began! But by the end of the trip we were all the best of friends. You know what they say about the Irish… neither do I. But I’m sure it’s something like… “The more they razz you, the more they like you!”

(Michael McGlynn)
On the Japanese tour we gave nine or ten concerts and three workshops, each in a different city of Japan, over thirteen days. The workshops were really fun because it gave the audience and locals a chance to interact on a personal level with the choir. We even had the privilege of singing on Japanese national television for three - four million viewers (yes, I was nervous). 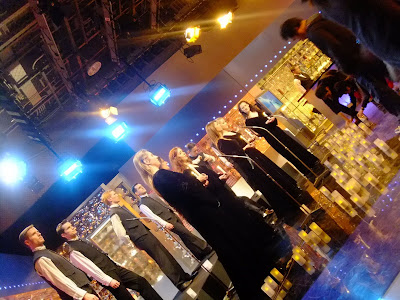 Perhaps the most profound element of performance that I learned as a new singer to Anúna, was the effect this music has on an audience. The Japanese are respectful and quiet people and as a whole, they are some of the most well behaved audiences I have ever sung for. They sat captivated and completely silent throughout each concert and their rapt attention, combined with the compelling music and colorful lighting, created an atmosphere of a dream-like sequence. Musicians are used to gauging an audience based on their reaction to a concert. We describe it by saying we can feel the ‘energy’ of an audience, or we know it by their exuberant clapping. I had to be much more keenly aware of the ‘energy’ in a Japanese audience because of their unmoving and concentrated attention. Over the course of the tour, I became more and more aware that there was a gentle hum of energy flowing from the listeners. They were touched by the atmosphere and soaked up every last nuance. I think they were really listening, and not just hearing the music. The more I was aware of this newly identified energy, the more I was able to respond and change how I performed for them.

After the concerts the Japanese audiences relayed much appreciation by sharing their happiness and sense of peace. They expressed a genuine gratitude and love for our music by presenting us with gifts everywhere we went. It seems to me that the emotional experience listeners have when hearing the music of Anúna, is the magic that makes this ensemble compelling and successful. After all, it is certainly the aspect that initially drew me to love the music of Anúna. 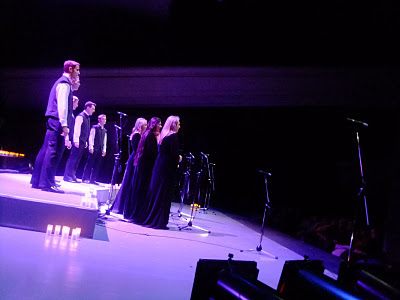 As a professional singer, I have had some really beautiful musical experiences that I cherish and value. But my experience with Anúna was completely different than anything I’ve done before… and I loved it! In my opinion, the culture that Anúna has developed over the past twenty-five years is something uniquely individual and noteworthy. Their music, which could be identified as a ‘crossover’, is easily approachable and loved worldwide. Having now had the experience of touring with Anúna, I must agree with the comment Michael McGlynn shared with me last August: being Anúna just might be “dangerous to the soul”.

Coming Up: Part Two of Kira's experience
Posted by Paul Carey at 9:12 PM