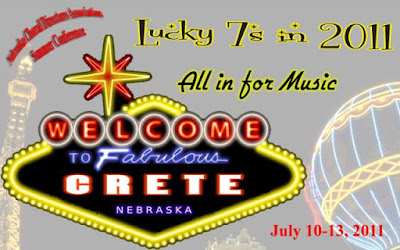 I was honored to be a presenting clinician at the 2011 Nebraska ACDA summer conference at Doan College this past week. The invitation came from Matt Harden, a great friend and professor at U of Nebraska Omaha. I presented two sessions; one was a talk which also included a demonstration choir of 16 high school students about the student-centered progressive teaching methods at North Carolina Governor’s School, my six week intensive summer gig in Raleigh, NC where I work with gifted HS choral musicians. The second session I presented was on the potential for greater collaborations directly between not-dead composers and not-dead directors- in other words, forming direct links between these creative artists without the dumbing down that happens when the self-serving filters of mega-publishers and mega-retailers get in the way.

Both sessions were big hits and I will try to find time to elaborate upon my interest session presentations and the reactions to them soon, but for now I would like to talk about the conference. By the way, I will present the session I mentioned first at the North Central ACDA regional conference in Madison, WI in February 2012. Thanks to Aimee Beckman-Collier, Rhonda Fuehlberth, and Mary Kay Geston for the invitation to present there- I’m really excited about it!

At the Nebraska conference there was a sense of camaraderie and fun amongst all attending. The theme was a sort of Vegas “Lucky Sevens” idea and this presented itself with all sorts of wonderfully wacky table decorations and also door prizes for virtually everyone by the time we were done. The sense of play in Nebraska was apparent and quite sweet!

In addition to this fun, there was an amazing array of talent, both local and brought in- I was truly amazed at Nebraska ACDA’s ability to bring in the following folks:

Sigrid Johnson led the directors’ choir, which learned a large amount of music in 2 and ½ days and performed a great concert on the final day (which included my Roger Dean SATB/piano publication “Thou art the Sky”).

Bret Amundson, an amazingly talented young man whose training has been very much influenced by Axel Theimer, and whose sessions on vocal health and vocal awareness were brilliant. Bret and I became good friends almost immediately- here is a young man with a great future, and he is also very humble as well.

Vijay Singh led a 16 voice HS honors vocal jazz choir, which put on a very impressive concert on the next to last night

The chamber choir “Voices of Prometheus” led by Paul Crabbe from Missouri sang a delightful a cappella program one evening which included some amazing Weelkes, Mathew Harris, and much more

Aimee Beckman-Collier, current president of NC ACDA, in a session on delving deep into a piece by Brahms in a really creative way. It was obvious that Aimee is one of those educators with a whirlwind of exciting ideas, enthusiasm, support for her students, etc. She also gave an address to the directors at the final luncheon about the2012 NC ACDA conference which will be a totally new way of presenting an ACDA conference in that every element will tie into a main theme of high value to all attendees.

Add in reading sessions and other events and Nebraska ACDA packed more content of high value into three and half days than I can ever remember anyone else doing. Congratulations to Dr. Matt Harden and the entire Nebraska ACDA organization. I was truly honored that I was a part of this.

Gotta say, Sig Johnson is one heckuva great director/musician/mensch. Every time I see her she is inspiring singers to greatness and challenging them to go beyond the humdrum. And she does this all with such grace. I am so happy to call her a friend. She has touched the lives of tens of thousands of people over the span of her career, which I hope will keep going for a long, long time!

So here are some of my old and especially new friends from this adventure in Nebraska: the dedicated beyond belief Matt Harden, the wise beyond his years CJ Harden, the totally gracious and smooth Phil Hesterman, the jazz groove master Fred Ritter, the thoughtful Rhonda Fuehlberth, the ever-smiling Paul Crabbe, the smooth operator and baritone voiced Vijay Singh, the very handsome and talented Gregg Zielke, the ridiculously talented for his age Bret Amundson, the ever-smiling Sig Johnson, the truly inquisitive and dedicated educator Aimee Beckman-Collier, the singer I want to watch because of her smile and enthusiasm Tina Schwahn, fellow U of Illinois alum Kat Doebel, the young director to keep your eye on Stacie Blackmore, and many more folks. The friendly and very capable student interns who kept everything operating so smoothly were amazing. Nebraska ACDA- you are awesome. Thanks for inviting me to be a part of your great summer conference!
Posted by Paul Carey at 9:58 AM 1 comment: