I am writing today to tell you about a new recording project by the amazing Susan McMane and her outstanding choral organization, Young Women’s Choral Projects of San Francisco. About to celebrate their fifth season, the choir will work in studio this summer at the state-of-the-art Skywalker Sound in California with a topnotch recording engineer. The result will be a new recording of many excellent compositions, including by living composers and will be out in the fall. The repertoire is mostly Christmas music, so the October release date is well-chosen. 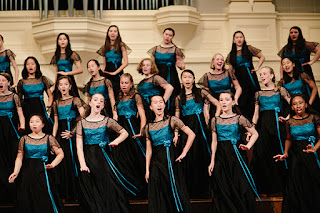 I first met Susan at an ACDA conference year ago. I was struck by her artistic standards and unfailing energy. Over the years Susan has been awarded three Grammy awards and traveled the world to share her choral excellence and vision with choirs of all ages. After many years leading youth choirs in San Francisco she decided to create this new group, a more elite ensemble of amazing young women—thus the group is not a children’s choir. The idea of projects allows Susan and the ensemble to plan and produce more than just your average concert. In fact, the ensemble has specialized in creating programs about the empowering aspects of music and has done a number of very interesting collaborations with other choirs as well as with well-known singers such as Moira Smiley. If I lived in San Fran I would be at every event they create!

To help produce their first recording there is an Indiegogo page you can visit. Click here!

The rewards for donations to the project are pretty awesome. Susan has already chosen most of the repertoire for the recording and it will feature pieces commissioned by the choir from Frank La Rocca (a much underappreciated west coast composer- he deserves far more national attention) as well as by Eric Barnum of Minnesota. In addition, there will be pieces by other topnotch living composers such as Eleanor Daley, Alice Parker, David Conte, and others. Acknowledged choral masterpieces by Victoria, Biebl (not Bieber), Benjamin Britten, and others will round out the recording.

Susan has shared recent recordings of some of the pieces which will go through the process of professional recording this summer. I have to say that what I have already heard is spectacular! Please keep an eye on this project by visiting the Indiegogo page and I will update this blog with more news as the recording session happens. For anyone who appreciates finely-sung choral music, and especially, meaningful music for sparkling women’s voices, this project is exciting news.